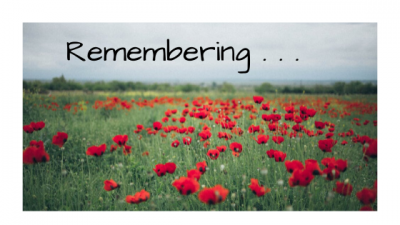 Remembrance Day has always been a very significant day in my family.

My maternal grandfather, Frank Goddard served as a soldier at Vimy Ridge in World War I.

My father, Edward Parham, was a sailor for the British Navy in World War II and also served in the Korean War twice for the Canadian Navy.

For the last few years on November 11th, my sister, her daughter (my niece), visit our parents and grandparents graves to remember them and thank our father and grandfather for their service so we can live in a peaceful country.

We also thank our mother and grandmother because they stayed at home looking after the children and kept the home ready for their husband’s return from the wars.

Here are a few facts about Remembrance Day:

Here are a few facts about The Poppy:

Let us all remember and be grateful for those brave men and women who served in order for us to live in a peaceful country.